On the eve of my flight to Texas, while preparing for my 4 shows there with B. Dolan, I’ve been thinking about my past experiences in the Lone Star State. One thing is for sure…there’s never been a dull moment.

The last time B. Dolan and I played Houston (show review here), we were on my LI(F)E tour. On this particular evening we were surprised to see that a popular national bank had set up a booth inside our venue. Apparently they were “sponsors” of the show. We harassed them until they left, but not until they hurled some threats our way. Stuff like…you know…we’ll never play this city again and we have no idea how detrimental this situation will be to our careers. Needless to say, we reveled in the moment, made them pack up their credit card offers, and bid them a fond adieu with a mature and age-appropriate gesture.

Courtesy of the creators of Knowmore.org

However, the most absurd experience I had in Houston took place during the Death Dance tour a couple years prior. Our show was at Warehouse Live, a venue with two separate rooms. On the night of our show, the second room was hosting a minor league pro-wrestling event. I’m not sure what it’s really called. It’s like pro wrestling but it’s not “pro.” It’s like backyard wrestling, but there’s no backyard involved. Anyway, my group was sharing the same backstage area as all of these wrestlers who were dressed in their tights and fabulous sparkly outfits. Despite our typically drab sense of fashion, we were mistaken as wrestlers throughout the night. I can’t understand why.

One of the wrestlers pulled on the shirt of my tourmate in order to wipe baby oil from his hands. Apparently this is acceptable behavior in their circuit of amateur pro-wrestlers. He apologized once we explained, one last time, that we were actually not part of their event. We had no trouble from there on out. At least not from the wrestlers.

Our show went off without a hitch. The crowd was rowdy, excited and appreciative. Things were going so well that the entire security crew decided to leave the club early because…you know…what the heck could possibly happen at an indie-rap show? And that’s when a slice of pepperoni pizza hit me in the face.

Since the show was going so well up to that point, and since everyone was in such high spirits, I showed good humor about it and kept the show moving. Hell, I’ve been known to throw food into the crowd from time to time. No big deal. But then came the crust, whizzing by my head at a “fuck you” speed. Almost as fast as the mood change once I stepped into the crowd, grabbed the pizza boy by his face and tossed him to the floor. I got back up on stage to finish my set, but he was too drunk to know when enough was enough. He came on stage, I knocked him down again, and that’s when my merch guy was kind enough to escort him out of the club.

When the show was finished we were told that the pizza boy had returned with a car full of people who were waiting for us outside of the club. It’s never good to get into these kind of altercations when you have 20 more shows to play, so we let the amateur pro-wrestlers act as a diversion as we snuck out the back of the club. Once we started driving it was clear that something was wrong with the van. It wouldn’t drive any faster than 20 MPH and I think the back axle gave out. We drove at a snail’s pace for about 5 minutes before I noticed a car behind us with no headlights. And then the headlights flicked on. And there they were – a clown car full of disgruntled pizza boys ready to avenge the fallen pride of their homie. And there we were – a van full of exhausted performers puttering along in the middle of unfamiliar territory hoping to to find our hotel before the van totally shit the bed. As fate would have it, we unknowingly headed straight toward a police station and this is when the pizza crew darted off into the unlit streets and aborted whatever mission they were on.

The next day, while waiting for the van to be fixed, I was alerted that the guys who were tracking us down the night before had guns. Really though? I slam dunk your drunk friend’s face after he throws pizza at me (adding the cherry on top of what was already an awesome show), and you’re going to retaliate with guns? I find that reaction to be A BIT EXTREME. Thankfully nothing stupid happened. Except for all of the other stupid stuff that happened. And now B. Dolan and I are coming back…ready to get stupid again. But let’s not get too stupid. We’re all adults up in hurr. Right, right? Fuggit…we’re fin to mess with Texas. 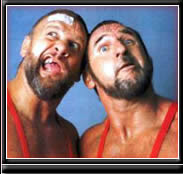 What can I say? Houston goes hard. Kudos for acting like a true Houstonian would & knocking the kid out! Can't wait to see the show on Friday!

I see you saved the best for last. I haven't been to Trees in years. Should be a good show. Trees has one of the best sound systems in Dallas...

why would a person come to see an artist they obviously like and then behave so foolishly? You guys are fairly large framed, the alcohol must have made him unable to notice. This kind of behaviour only degrades and tarnishes the image of hiphop. Save that crap! let the artists perform and if you want to share your pizza give it to someone who needs it sucka! sage rules

Yeahwow. "Houston goes hard." Yes, the re-tossing of a pan-tossed pizza at someone sharing their art and sweat with you is quite the "hard" behavior...

Houston is really just 9th Ward with a few accidental Starbucks sprinkled in for effect. Not everyone in Texas is a puppetfucker, and I really dug your spoken word appearance at Waterloo in Ausitn. Thanks for doing what you do!

As Rap-A-Lot Records has taught me since a young age, Houston most definitely goes hard.

they saw "the world thru the scope but (they) gain no insight with it" YO! it'll take more than pizzas and pistols to stop the Sage! haha!

In regards to your Li(f)e tour at The House of Blues I'm certain it was Clear Internet that had a little table set up to the left of the entry to the peacock room. Not exactly a credit card company...
I remember because I remember everything about that night, it was one of the most amazing nights of my life!! I MET YOU AND SHOOK YOUR HAND!!! and even got a CD signed!! I was right in the front jumping up and down like a maniac and belting out the lyrics to all of my favorite songs right with you!!!
CAN'T WAIT TO SEE STRANGE FAMOUS TAKE OVER AT FITZGERALDS! :D

Drew,
You're right, "Clear Internet" DID have a booth. But so did Capital One. We ushered both of them out of the venue. I couldn't believe what was going on. They were set up right where a merch booth would/should be set up. Cripes almighty.

You should have also mentioned how you jumped up on that speaker and got at that drunk ass fool that the entire crowd wanted to beat the crap out of because he wanted you to do Broken Wings.

I actually appreciate the hell out of that guy because I wouldn't have heard a song that has to be one of my top five favorites had he not drunkenly pushed the issue...

Your merch booth sold out that night!! I wish I'da had my paycheck in earlier so I could have bought a poster, a t-shirt, a Personal Journals CD... I did buy Personal Journals on vinyl though! I play Different every morning!!! "I'm different...in a different way. The only thing that stays the same is change" <--- I will have that tattooed on my body.

True Houstonians?! AWESOME! I neva heard that one before...

Melissa, that was the best thing I have read all day. Normally I wouldn't have any praise left after spending it all on Sage and B. Dolan, so I had to compliment you first. They can fight for the scraps.

I know Sage said he felt bad about tearing into the guy in DC on the Life tour... Some puppetfucker (thanks again!) thought the best way to impress a lady was to come to his show and ignore the artists while trying to make out with her on the side of the stage... but GODDAMN it was satisfying to watch him do a PSA about PDA. And it gave me room to move my better half up, who's a little smaller. You wanna treat a lady right? You bring her to Sage and Dolan, and you put her in position to watch THEM, and not YOU.