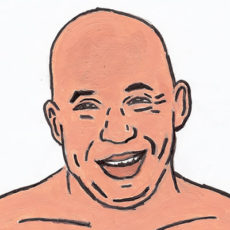 The most common response to the announcement of his 2009 signing to SFR was, “Who the fuck is Curtis Plum?”

Let’s start with the basics: Curtis Plum is a character who makes Casio keyboard beats and raps in a Katharine Hepburn accent. But wait… there’s more!

Aside from the assistance from label mate Reanimator on a couple of tracks, all of Plum’s beats are completely self-produced. Every song on Call My Cellphone has a theme of its own, and these themes are turned upside-down with a dose of his signature style of twisted humor. Rather than the tread-worn punchline style of most hip hop ‘humorists’, Plum opens up his mind and empties it all over the borders of hip-hop topics, blurring the line between keeping it real and creating the surreal. It takes a special kind of emcee to tick off a list of 20 ways in which he can be “Up in Ya Face.”

Despite the lo-fi nature of his recordings, the music is oddly hypnotic. The melodies are as catchy as his lines are quotable, and when all elements come together the songs become maddeningly infectious. There is an old school sensibility to the sparseness in Plum’s production style, which gives the vocals adequate room to breathe. This is essential to Plum’s effectiveness, as he has a penchant for great storytelling. He goes from being a “Bike Cop” poppin’ wheelies of justice, to being Vin Diesel’s best friend… consoling him at yet another winless night at the Oscars.

It’s not all jokes though, as you’ll find out on “XBox Trife Life,” where Plum personifies an Xbox game system left to deal with its waning popularity. When the sad strings kick in you’ll begin to understand how trife life can really get. Things get a bit personal on “Indie Rocker,” as Plum puts an old Junior High School friend on blast for being a closet Blink-182 fan. You want social commentary? The song “Jack in the Pinebox” exposes the nasty secrets of Jack-in-the-Box fast food restaurants. Deciphering the reality from the fantasy is part of what increases this album’s replay value. Did Lil Wayne really try to rape Curtis Plum backstage at a show that he won tickets to a couple years back? Shit if we know.

In fact, we don’t know much about the person behind the music. He has disappeared and reappeared with various accents and game plans ever since he started working with Strange Famous Records back in 2007. He showed up unannounced to the SFR Showcase at SXSW in 2009 which is the first and last time he met with label owner Sage Francis. Scattered peanut galleries online have murmured rumors that Curtis Plum isn’t real, or that he’s a composite character made up of different rappers on the label. Throw that idea out the window. There are also rumors that Plum used to be a sponsored skater who operated under a different alias. One person from Boise, ID recalled a time when Plum ran out of a house party into the snowy woods completely barefoot, never to be heard from again. ‘Til now of course.

Here are the facts: Curtis Plum is a bizarre cat who has delivered an incredibly fun and enjoyable album. This will most likely be the only album we get from the man, in this incarnation at least, so eat up every minute of it. Plum will not be touring any time soon due to how his last tour got cut short thanks to a horrible run-in with the Pittsburgh police. With that in mind, be sure to bump this album in your rides with cellphones held high. Pop a wheelie of justice. Or don’t. He’s cool either way.