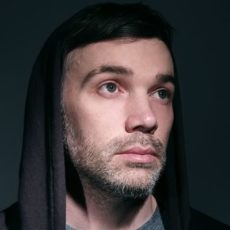 I was born with the name Ricardo Terfry. My dad started calling me Buck 65 the day I was born. I don’t know why. That’s the truth. A lot of stories have been made up about where the name comes from – some of them by me. I’ve lied about it. “Where does the name come from?” is a boring question. And the truth is, I don’t even know myself.

I also get asked all the time, “how would you describe your sound?” I don’t have a good answer for that either. I could say ‘hip hop’, but a lot of people would disagree with that. Why would they? Well, best I can figure is that it’s a very conservative genre and my take on it is very liberal, to say the least.

Hip hop (and especially the teachings and ideals of Afrika Bambaataa) is very important to what I do. But maybe in fairness, it should be seen as some kind of starting point for me. I write songs on a wide variety of topics – many of which are not common ones in hip hop, admittedly. When writing a song, considerations of hip hop or street credibility never cross my mind. That being the case, no point of view, emotion, or instrumentation is off-limits for me. There have been cases where that’s meant being very un-macho or putting a banjo player to work (both decidedly anti-hip hop notions, generally speaking).

I’m lucky enough to know many talented musicians and I work with people who can help me make good songs whenever possible. So far, that’s run the gamut from one of the greatest turntablists ever (D-Styles), to classically trained musicians (members of the Chicago Symphony, Gonzales, etc.), to gifted folk musicians from my own backyard (Old Man Luedecke, Al Tuck, etc.). It’s always a question of what’s best for the song (and who answers the phone).

So what do you call songs like Indestructible Sam, the French version of Devil’s Eyes, Lil’ Taste Of Poland or Kennedy Killed The Hat? I certainly don’t know. I don’t think they belong in the same genre together… Does it even make sense for one person to express themselves in such a wide spectrum of ways? Personally, I think it makes less sense to express oneself in the same way all the time. And I know for a fact, from experience, that I’m no more complicated than anyone else.