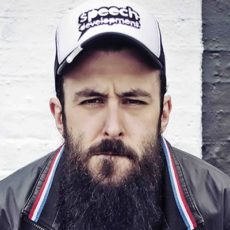 “Here’s an album-of-the-year contender – the height of this thing represents a steep and difficult climb for anyone else to reach.” – Buzzinemusic.com

“Introdiction” is produced by Renholder, aka Danny Lohner, (Nine Inch Nails / A Perfect Circle). The album features collaborations with fellow SFR crew Sage Francis and B. Dolan, as well as P.O.S. of Doomtree, plus extra production from Richard Russell of XL Recordings, Radio 1’s Zane Lowe, Aupheus, Worgie, and Steve Mason. Yila served as the project’s executive producer.
“I grew up listening to punk and hardcore so bringing some of those influences into the hip hop/spoken word world in which I write has been a pleasure. Hope you all enjoy it!” – Pip