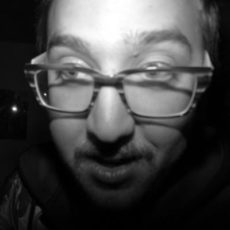 Duncan Jewett’s Blood Red is the end result of a decade-long collaborative effort that aims to elucidate what it means to be human in our increasingly fractured digital age. As a young teenager, from the isolation of his Durango mountain town, Jewett began writing, singing, and home recording; eventually using online music forums to connect with a world of like-minded artists. In the early 2010’s a handful of skeleton tracks were presented to Strange Famous Records’ honcho Sage Francis, who then paired Jewett up with producer James Hancock as finishing touches were applied to what would become a fully fleshed-out project.

“I loved the tone of his music and the unique singing style, but as it’s not rap-heavy I wasn’t really sure how it would fit on our label,” admits Francis. “He also seemed more of a reclusive type rather than someone who we could expect to tour and do the industry dance. Yet, I found myself returning to his songs. Often. After hearing Hancock’s contributions to the beats and production, I was convinced I wanted to do something official with this project. In fact, this is what originally inspired us to create SFdigi, the digital subsidiary of Strange Famous Records.”

Blood Red runs the stylistic gamut from hip-hop to folk to club-pop, featuring additional contributions by Brandon Logic and Broom E. Stylus. The lyrical content provides a direct reflection on love, loss, and mortality while embracing the internet paradox: We have never been more connected, nor more alone. Over the course of Blood Red’s completion, Jewett moved from Colorado to Santa Fe, NM, got married, adopted 2.5 cats, and watched as the internet increasingly became an arm of the surveillance state as our private thoughts got mined and sold to advertisers.